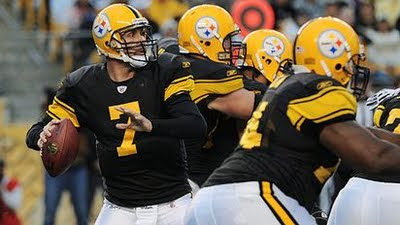 Ben Roethlisberger sat out last week's game with complications related to head trauma. This has been a frowing top of conversation for years and has increased dramatically this season, with many top players having some sort of concussion-like hits.
It was surprising to me that with all of the concern about long-term effects of these types of hits, that Hines Ward would call out his star quarterback for not making it back into the next game after getting dinged the week before.
Has Big Ben's toughness been questioned before? Not that I can remember. I always thought of him as a guy that stood in there and took the shots and got back up to play again.
You can see how quickly these guys turn on their "boys" when something doesn't go the way they want or expect it. Ward and Super Bowl MVP Santonio Holmes, who also spoke to the media about Ben sitting out, both retracted their statements, probably after getting taken to task by the team's management.
Posted by Jeff Carlson at 3:02 PM