Marve Gets Out of the U 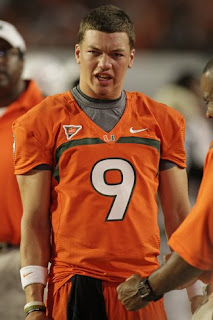 I wrote in October that there was no way for both freshmen quarterbacks at the University of Miami to finish their careers at the school. After news last week that Robert Marve would be suspended from their bowl game for missing classes, today it was announced that he would be transferring schools. Miami has given Marve his release, but with stipulations that he not tranfer to any ACC, SEC or other Florida schools.
This has infuriated Marve's father Eugene, a former teammate of mine with the Tampa Bay Buccaneers. Reports say he wants to go to the University of Florida, LSU or Tennessee and the Marve's don't understand why the SEC if off limits.
Robert Marve was the Player of the Year in Florida after leading his Plant High School team to the state title in 2006. He redshirted last year after a major car accident left him with a non-throwing wrist injury. He will have to sit out next year as part of transferring to another division I school.
Posted by Jeff Carlson at 5:24 PM