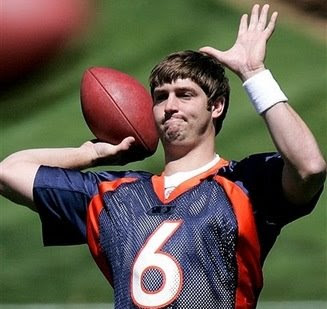 How many disgruntled players have left their bad situation to prosper in a new one? There have been a few to be sure, Corey Dillon did OK in New England after splitting with the Bengals, but there are more Terrell Owens and Randy Moss' creating more trouble for the next club than fixing their own personal issues. However, those guys may be Prima Donnas, but they aren't quarterbacks. John Elway forced the Colts to trade him after drafting him and Eli Manning played the same hand 20 years later, but they didn't play for a club, get "disenfranchised" with the situation (coaching or otherwise) and then go somewhere else and flourish.
Jay Cutler is saying he had a conversation about keeping the offensive coaching staff intact with the Broncos' owner Pat Bowlen and Bowlen says it didn't happen. Regardless, now Cutler is a whiner to Denver fans that see him wanting out as soon as he doesn't like the team's moves to get better. Throwing for a lot of yards doesn't always mean that you or your team is any good. Bowlen likes success and is trying to improve the team. Did Cutler not like what Josh McDaniels and the Patriots offense has been doing the last few years? Give it a chance kid. Instead, you now just look like a baby that is taking his ball and going home--where home is, nobody knows at this point.
Please respond to this post if you can give me an example a QB demanding out of one city and doing well in another.
Posted by Jeff Carlson at 6:17 PM

I don't know as though there has been a QB who's acted the way Cutler has and then has went on to flourish. I believe Brees went about his "request" for a trade from SD in a much more professional way and he's flourished quite nicely.

Once Cutler is away from Denver, he better pray the Broncos are not on his new team's schedule this year. If they are, he might as well be wearing all red in a bull fighting arena!!

We would like to nominate you for a FreedomToBlog.com Best of Blog Entry.

Please visit our site at: http://www.freedomtoblog.com to submit your blog entry!

Benefits include:
1) Permanent Backlinks to your blog
2) Fully SEO optimized for maximum exposure
3) A chance to be published into a top 500 best of blog book"