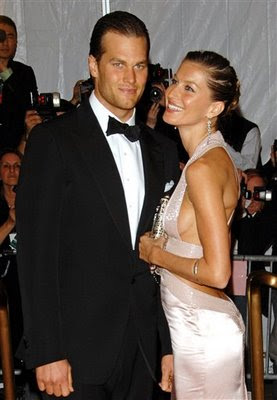 Congratulations goes out to Tom Brady on his marriage to supermodel Gisele Bundchen. For as much as I like Tom Brady's football skills and throwing mechanics, this is a time for young quarterbacks to learn from this football hero's mistakes as well. Do not get your girlfriend pregnant, as it significantly complicates your life. Tom Brady can afford to have multiple homes across the country, but his 1 1/2 year old son from his former girlfriend only has his dad near him a small portion of his life. And the wedding announcement reads something like, "a small affair attended by close family, including his son from actress Bridgette Moynihan" (who lives in Los Angeles while he plays football for the New England Patriots on the other side of the country). Follow his footsteps on the football field, but take note and do not make his mistakes off of it.
We wish him the best of luck with his new wife.
And speaking of mistakes, I was just reading about former Michigan quarterback Ryan Mallett and his excitement to get back on the field, now for the Arkansas Razorbacks. He was arrested over the weekend on a alcohol related incident. Again, learn from others mistakes.
Posted by Jeff Carlson at 9:08 PM

Did you HAVE to mention more problems about Michigan! :)