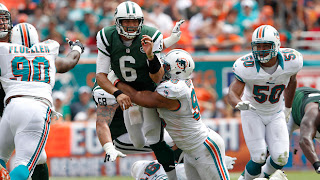 The New York Jets are starting to relive too many of their years past, dropping their last game 34-0.  They started a soap opera in the off-season by trading for Tim Tebow, the left-handed H-Back and even though they are 2-2, it has looked bad enough to feel like they are 0-4.  Head Coach Rex Ryan can feel it and anyone watching his post-game press conference knows he feels it.
While not seeing every snap of every game, I'm not sure of Tebow's exact play count thus far, but I have seen them take Sanchez off the field and use him as a true "wildcat" QB a few times.  I have also seen them leave Sanchez on the field and use Tebow as a decoy receiver, but the answer for the Jets woes is to use both of them on the field, but to motion Tebow into the backfield like a running back and use him as a slash player.  Half the time pitch it to him and let him be a dangerous runner on the edge with the ability to throw the ball and the other half a decoy.  On those decoy throws, a quick passing game for Sanchez and other runs to their running backs will all be more successful as the defense absolutely has to react to Tebow's pre-snap movement into the backfield.  If Tebow's 250 pound body takes a pitch on the move to his left, there better be quick support from both LB's and DB's, or he will gain a lot of yards on the edge and when they come up to help and abandon the WR's and TE's for run support, he can flip it over the top.  And done quickly and correctly, the defensive front must also react and then create different creases for their running backs.
So many of the teams that have some form of the "wildcat" take their normal QB off the field, but keeping that QB and using an athletic QB in motion will create more big plays than what it has in its original form.
Posted by Jeff Carlson at 10:44 PM