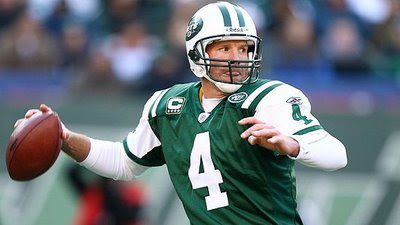 This may be the craziest sports story of the year and there have been plenty already. A week ago the New York Jets released Brett Favre from the reserved/retired list and the biggest post-draft story is Favre's potential return to the NFL with the Minnesota Vikings. Remember the tampering questions last year when the phone records were looked at to see just how much Favre had talked with Vikings coaches? Obviously the Packers didn't want him in their division, so he made his way to the AFC for a year. As of today, Brad Childress was still in Minnesota, even though reports had him in Mississippi on Wednesday night.
Maybe this is all hooey. But with Brett Favre, it probably has legs. At first thought, I couldn't believe it at all. But then I said to myself, that with Adrian Peterson behind him, Percy Harvin on the field (who knows where he will be used), this has the makings of something pretty good.
I played against Favrey when he was still on the Atlanta Falcons and I know how long ago that was, but this guy can still get it done for one more year, if he gets some help (maybe five more years).
Posted by Jeff Carlson at 1:04 PM