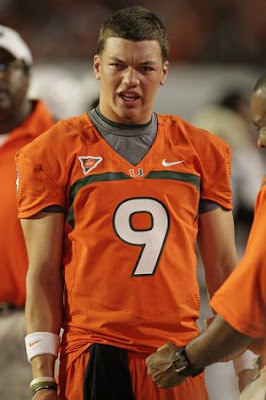 I read an article in the St. Pete Times by John C. Cotey about high school players fulfilling their dreams of a college scholarship on national signing day, only to quit, transfer or flunk out the next year. The statistics are pretty staggering. Most of the kids that sign letters-of-intent don't make it to their degree and a big percentage don't make past their first year. Locally, Robert Marve was the Florida Player of the Year two years ago and now he is looking for a new school to take his QB services, after falling out of favor at the University of Miami.
I almost didn't make it past my freshman year at Weber State. Bobby Petrino (University of Arkansas Head Coach) almost single-handedly drove me back to a southern California junior college at the Christmas break. I may have been a little home sick, but it was my treatment on the football field that I felt was my biggest disappointment and biggest reason for checking out the local JC's back home.
After much thought and prayer, I decided to return, mostly so that I wouldn't burden my parents by coming back and the gamble that I could find the right fit in a new school that I could earn another scholarship the following year.
Thankfully Coach Petrino moved on to another school and I flourished under Dave Arslanian and Mike Price. I earned my degree and made my football dreams come true in the NFL as well.
So to all of you who are priveleged to sign your scholarship papers next week and consider transferring because things aren't going as planned, be careful, the grass isn't always greener elsewhere.
Posted by Jeff Carlson at 7:28 PM