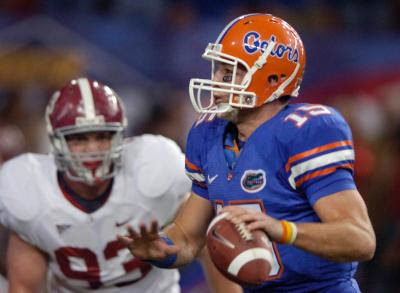 This year's model is taller, more slender and a better passer. Last year's Heisman Trophy winner is simply a better football player and Florida should win college football's national title. Sam Bradford has done a great job running the fast-paced Oklahoma offense and if he decides a personal trophy and a shot at the title were enough for him and turns pro, then he should be the #1 QB to go in the NFL draft.
Tim Tebow, on the other hand, as I have said here before is the best football player in the nation, bar none. He is not the best passer by far and should remain at Florida for another year. What he should do is take a road-trip down I-75 and come see me. In short order, I would help him make some subtle changes to his throwing motion to improve the snap of his throws, the quickness of the release and his balance. All that would do is make him a better NFL prospect, but he is already an incredible player that will probably add another national title to his trophy case before nights end.
Posted by Jeff Carlson at 5:09 PM