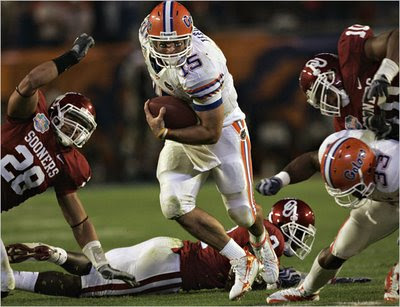 Thursday night determined that the Florida Gators are the 2008 National Champions. If the Oklahoma Sooners and the Florida Gators played 10 times, I believe the Gators would win at least seven or maybe eight of those games. They are the best team in college football this season with the best football player as their quarterback. Another thing that was determined is that Tim Tebow is not ready to be a passer in the NFL any time soon. I felt that he and his coaching staff lost all confidence in his passing down the stretch. Yes, he completed a five yard jump pass to seal the deal, but they reverted him to the battering ram that he was the last time they were in the championship game in Tebow's freshman year.
Tebow was asked about staying at Florida and he said he would have to look at it, but that he loved Gator Nation. He needs to love it one more year, because I believe his stock is lower now than before the game. Sam Bradford's stock is probably higher even after losing. Bradford throws an effortless ball even though it comes off a little low most of the time. Tebow has taught himself how to overcome very poor balance and bad footwork to make his passes work most of the time, but it can be painful to watch. I'm not sure what he will hear back from the NFL search committee, but he needs to refine his mechanics before going to the NFL draft.
Posted by Jeff Carlson at 8:26 AM