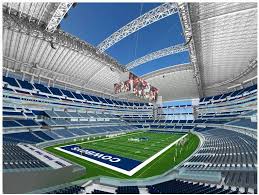 The NFL is not the AFL-Arena Football League. The Arena League had fields that were not all the same. The Orlando Predators end zones were rounded off because the arena was too small and others were customized as well. The AFL is not around anymore, but with the new "do-over" rule for the new Cowboys stadium, the NFL is making itself out to be a second rate outfit.
The Dallas Cowboys built the most expensive and most outrageous stadium in world history, but missed the mark with where they placed the planet's largest HD video screen. Now if a punted ball bangs off the screen like it did in the inaugural game last week, the down will be replayed. That is unacceptable. Jerry Jones needs to fix the problem at whatever cost.
Living in Tampa, we are used to watching the Tampa Bay Rays bang balls off the catwalks above the playing field. There are special rules for each ring going out from the center of the dome. At a recent game that my family attended, a high pop fly above home plate hit the catwalk and veered into fair play where the pitcher lurched and made a great catch. He was lucky he didn't injure himself going after the foul ball. The umpires had to conference to determine if it was in foul territory when it clanged the ceiling. Tropicana Field was built before a baseball team was placed, but with the Cowboys, it was predetermined that there would be football played. Jerry, do what's right and move the scoreboard or make it smaller for the good of the game!
Posted by Jeff Carlson at 7:06 PM