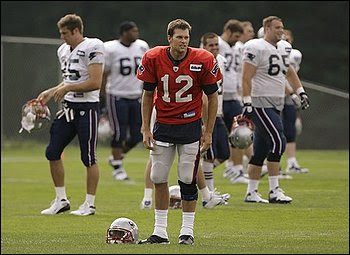 One man's injury is another man's opportunity. This old saying in football and maybe in all sports has been played out in Tom Brady's life on both ends. When Drew Bledsoe got crushed and hurt his chest, no one expected the former Michigan quarterback (6th round pick) to do much for the Patriots, but a Super Bowl win changed the destiny of both QB's.
Last season, when Brady went down in the first quarter of the opening game, even less was expected of Matt Cassel (undrafted free agent from USC), who hadn't played a meaningful game since high school. But the opportunity came and he seized it and is now the franchise quarterback of the Kansas City Chiefs. Cassel didn't unseat Brady in New England, since Tom does have 3 Super Bowl rings to his credit, but you can see why players do not want to give another guy a chance to get in there, because he just might be pretty good too.
It sure is great to see Tom Brady back from the knee injury and here's hoping no one else gets a chance to see how good a quarterback they might be for the Patriots this year.
Posted by Jeff Carlson at 10:49 PM